New Hair-Do's "Celebrity Edition", but Are they Really Do's?! 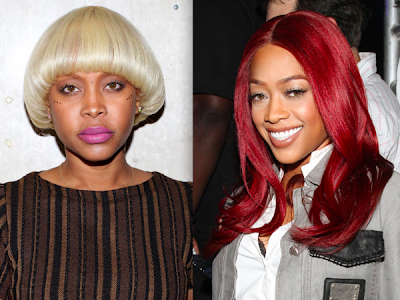 Both attended the 2010 Hennessy Artistry concert series rocking bold new hairdos.
Badu chose a platinum blonde bowl cut bob, which could very much be a wig, while Trina opted for a starkly contrasting crimson red style, very similar to Rhianna's new hair do, hmm! Makes you wonder huh. Maybe someone is copying...I'm just saying, but both women are beautiful.

You be the judge on this one!
﻿
Personally, I think Erykah will change her hair in no time, but Trina is known for keeping styles for a looong time, so I think Trina is keeping this look at least till next year.

What do you think?
celebrity hair