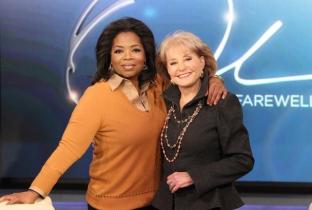 Look like fellow Natural, or claim to be, Ms. Oprah Winfrey cried once again on national television during the Barbara Walter's Special: Oprah the Next Chapter, which airs tomorrow. Barbara asked her about all of the gay rumors, and Oprah replies, "I'm not lesbian. I'm not even kind of lesbian. And the reason it irritates me is because somebody must think I'm lying. That's number one. Number two, why would you want to hide it? That's not the way I run my life," She continues by saying..

"She is the mother I never had, she is the sister everybody would want, she is the friend everybody deserves," she says. "I don't know a better person."
Oprah gets emotional, saying, "It's making me cry because I'm thinking about how I've probably never told her that."
I'm so ready to see this special! Join me as I watch it.
celebrity news