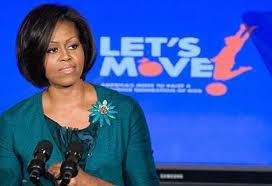 "Over the past year, we’ve worked hard to raise awareness, get folks engaged and get Let’s Move! off the ground," Obama said. "And I think we’ve gotten off to a pretty good start. But what we’ve done so far is just that — it’s a start. The key now, in this next phase of Let’s Move!, is to get results — to ensure that our efforts are actually making our kids healthier."
Michelle Obama is still at it, fighting childhood obesity that is, with her "Let's Move" campaign. It's one-year anniversary is tomorrow. Big ups to Mrs. Obama!  She will make a few media appearances this week such as the "Today" show & "Live! With Regis and Kelly"...be sure to tune in! 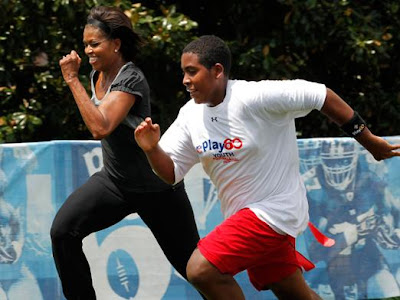 Michelle Obama caught a glimpse of life in the NFL Tuesday when she appeared alongside NFL Commissioner Roger Goodell, former pro football players Deuce McAllister and Derrick Brooks and former coach Tony Dungy to promote the next phase of her childhood obesity initiative. "Let's Move!" in Louisiana. As part of the "NFL Play 60" program, players are advocating for Obama's cause and urging parents to ensure that their children get 60 minutes of exercise a day.
Source: Politico & Essence
celebrity events celebrity fashions celebrity news