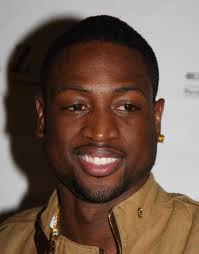 In Chicago yesterday, an athlete could not have been more happier. Dwayne Wade has been awarded custody of his 2 sons ages 9 and 3. It has been said that this 3 year long custody battle is one of the longest custody battles in the state, it's a great thing that he never gave up. I'm sure he's a great father. Go Dwayne!
He's such a cutie...My goodness.
celebrity events celebrity news